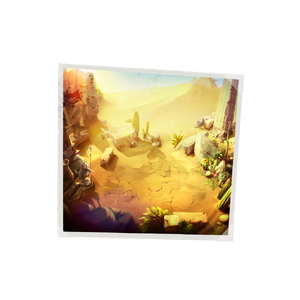 Yellow Desert is a region of Bird Island.

The Yellow Desert is the second Region on the World Map. It’s divided into two zones. Although it's mainly a desert, on the whole it does not appear too barren and bleak. Interesting rock formations, numerous types of plants (from cacti to fields of flowers after the rains) and lush oasis' enrich the environment.

Once home to the yellow bird tribe it also boasts ancient race tracks and large chalk carvings / drawings, and pyramid shaped buildings (looking just like the old chuck designs). The ancient ruins have made the desert a popular location for pig tourists.

The desert is also where the players can find the first member of Eagle Force, Major Pecker. This former military expert and survivalist has been going a bit…peculiar due to the long periods of isolation and now hides in the desert in his "pig-proof" bunker.