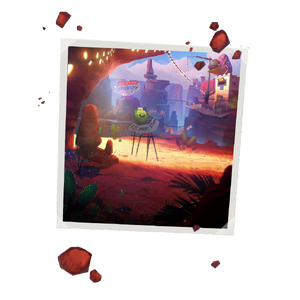 Red Canyons is a region of Bird Island, divided into three zones and the location of Bacon City, the massive pig holiday resort owned by Don Bacon.

A region of raw, primal beauty, with beautiful red rock formations. The home of the ancient red tribe who founded an aggressive tribal culture here with old totems and lots of rock drawings.

The coast of this wild and primeval area is now heavily colonized by the pigs, being closest to Pig Island in the far distance. It resembles Pig City on Pig Island, a mostly urban region, with crazy and haphazard structures everywhere, but this "city" is more like a tourist trap than a proper city (called Bacon Coast). The last remaining Red bird fights an endless but futile battle against the pigs. The resistance (a one man show) plasters everything with anti-pig propaganda and sabotages pig structures.