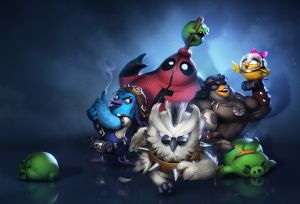 Let loose the fowl of war!

Birds are your primary (and, well, only) tool in the fight against the dastardly pigs and their schemes against Bird Island. Divided into five color categories, birds have a variety of special abilities and bonuses that can be used to fine tune your team and their performance. Of course, every bird you have can also be used for the simple unleashing of great vengeance and furious anger by ramming the pigs and making they wish they've never visited the island.

Every bird you gather is assigned a Rarity. This goes beyond just how often they can be obtained in the game, but are also a good indicator of just how strong the individual birds are. A one star bird at level 9 will be weaker than a two star bird at level 1 and the disparity in power only grows bigger as the number of stars increases.

Your flock is characterized by three basic statistics:

Additionally, each bird has a special Super Shot ability that activates every several turns (depending on the bird in question). Each bird color has their own attack pattern, but some particular birds may not follow these patterns:

Every bird also has a special Bonus ability. Most birds will have a Leader bonus increasing damage by 30% for all other birds of their type in the team, but certain set characters will provide a very special Leader bonus, depending on the Set: